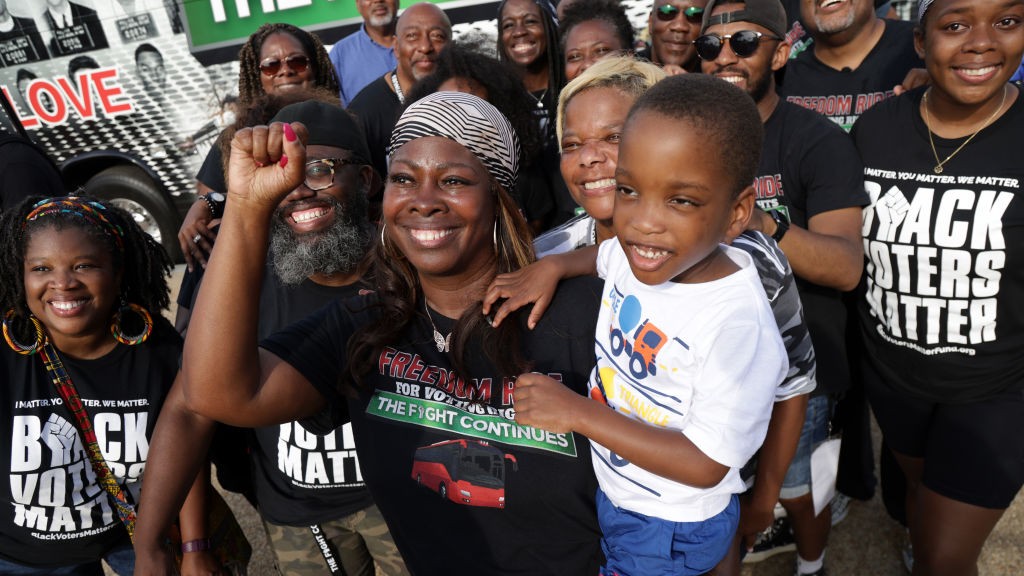 Change must happen. And it starts at home.

Last night I read “Equality’s Call: The Story of Voting Rights in America” to my three white kids, ages 7,7, and 5.  The backdrop to our lovely family reading was Senator Kyrsten Sinema of Arizona announcing she would not support undermining the filibuster to pass legislation under any circumstances and Senator Joe Manchin III of West Virginia agreeing.

“Equality’s Call” recounts the history some of us know all too well.  That at our country’s origin, only white land-owning men were allowed to vote.

“That isn’t fair!” My kids exclaimed.

“No, it absolutely isn’t”, I responded as we named people in our current lives who wouldn’t be able to vote, namely their mom, sister, and Pastor, Black woman Rev. Dr. Jacqui Lewis.  We also made note of how some people had two (what were deemed of as) strikes against them, how they’re raced, and their gender, making it doubly difficult to see the path to equality.

“What about you? I asked my two white sons. Could you have voted then?

“Because none of us are free until all of us are free!”, his twin brother Zane chimed in, quoting Fannie Lou Hamer’s poignant statement that’s become a common mantra in our home when talking about complex holidays like July 4th and how to hold our white skin advantage in an Anti-Black world.

“Yes … that’s absolutely right, I replied. However, I am wondering if in that moment the best choice would be to not use your voice/your vote at all? Do you think you and Levi and Dada (also white) would vote for bills and policies that would enhance equality?”

“Then I wonder what it would look like to use your power by voting, while ALSO being loud about the injustice that Black people and all other people of color and women can’t vote and working alongside them for change?”

The book moved us through the long struggle for voting rights in America and reminded even me that this has never been a single moment movement – and that along each step of the way there have been those standing in freedom’s way.

As the book concluded, I pointed to the television and said, believe it or not, kids, TODAY, we are in the fight of our lives to protect and defend voting rights once again.

For years, the GOP has led coordinated attacks on voting rights with ultimately one goal: Maintaining the power and (false) promises of white supremacy.  When advances come in the name of voting rights or any Black advancement, white Americans engage in what Carol Anderson calls “White Rage.”

“The truth is that the hard-fought victories of the Civil Rights Movement caused a reaction that stripped Brown of its power, severed the jugular of the Voting Rights Act, closed off access to higher education, poured crack cocaine into the inner cities, and locked up more Black men proportionally than even apartheid-era South Africa.”

We must say again, the attack on voting rights is not new.  It is the fight to keep white supremacy thriving in an increasingly multicultural world.  While many have been quick to point to Sinema and Manchin as the gatekeepers of democracy and justice, pointing fingers at just two people allows white people like myself to distance ourselves from the role we have in dismantling the pernicious nature of white supremacy.

The stumbling block to ending the filibuster and advancing voting rights isn’t Sinema and Manchin. It’s white supremacy, and it’s going to take all of us to take it down.

Dr. Martin Luther King Jr. warned us about this in his 1963 “Letter from a Birmingham Jail”:

“I must confess that over the past few years I have been gravely disappointed with the white moderate. I have almost reached the regrettable conclusion that the Negro’s great stumbling block in his stride toward freedom is not the White Citizen’s Councilor or the Ku Klux Klanner, but the white moderate, who is more devoted to ‘order’ than to justice.”

While examples of the white moderate are all around, it was excruciatingly painful to celebrate MLK Day on Monday, and see white supremacy restrict voting rights the next; voting places in counties where Black and Latinos are over-represented are closed, early voting and mail-in voting is restricted, voter intimidation and poll site inaccessibility is rampant, and gerrymandering and voter suppression is supreme.

White supremacy, especially combined with the “imperialist capitalist patriarchy” as cultural critic bell hooks named, has always organized to restrict liberation and equality.  White women, in particular, play a uniquely violent role in maintaining white supremacy. Every generation of white moms, with a few exceptions, have found it in their self-interest to preserve the advantages of our skin color, pass the advantages on to our kids, and educate our kids to believe in white superiority, no matter the cost to Black and Brown people. This includes white moms with left, right, centrist, and apolitical beliefs. (Read more here.)

What whiteness fails to recognize, however, is how harmful white supremacy is for whites, too.  For example, white people have been some of the biggest victims of voter suppression tactics.

The King family was clear.  There will be no celebration of MLK Jr. without legislation. But you know who didn’t care, took off work, quoted “I Have a Dream” ad nauseam, and failed to listen to the Kings still speaking today?

And we, WE, can do something about it.

We can use our voices, our power, our hearts, and our votes to keep pushing the needle towards equality. The work feels overwhelming at times, but it begins at home, in our hearts, and in the way white people must dismantle and call out white supremacy anywhere and everywhere we see it.

People like LaTosha Brown, Cliff Albright, Rev Dr. William Barber, Rev. Dr. Liz Theoharris, Stacey Abrams, Helen Bulter, Tameika Atkins, Deborah Scott, and many others are leading the way today. We have much to learn from them, and, white sons and daughters, even though the ability for YOU to vote has been granted and will likely always be protected, the time is STILL right to remember that nobodies free until everybody’s free, and that none of us are living in a true democracy until the filibuster is demolished and voting rights are protected for all.

The question, young ones is the same.

Will you vote? Will you use your voice?

How will you respond?